As part of the procedure in Step 1 and Step 2, the Ombudsman Service will agree a resolution between the Complainant and Respondent or determine one or more Outcomes.  Where the Head of Ombudsman Service/Appeals with the relevant Panel determines a finding and the Outcomes, the decisions will depend on the documentation submitted, the evidence presented and, if applicable responded to, at the round the table discussion or hearing or appeal, and the severity and frequency of the complaint; and on factors which include:

The Head of Ombudsman Service/Appeals will provide all parties with the details of the Outcome which will include a reminder of the expected Codes of Conduct (standards and ethics) and/or Coaching and Mentoring Core Competencies of each individual/organisation within the coaching and/or mentoring industry.

.
Each grievance will be identified as a specific Type of Complaint.  The Outcomes determined will include one or more of the following:

If there is insufficient evidence to uphold the grievance, the result of the grievance will be documented as rejected.

Where the grievance is resolved the Outcomes will include an explanation on the resolution and all related Codes of Conduct (standards and ethics) and/or Coaching and Mentoring Core Competencies clause(s).

Where the grievance is upheld the Outcomes will include the details that support the decision(s) and all related Codes of Conduct (standards and ethics) and/or Coaching and Mentoring Core Competencies clause(s).

click here to complete the Resolution(s) or Outcome(s) form. 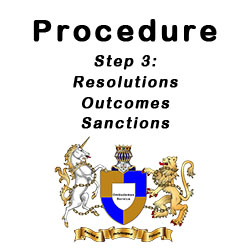 In line with the Ombudsman Services’ Disciplinary Procedures, Sanctions may be awarded against any party involved in the Formal Complaint – Respondent, and/or Complainant, and/or Third Parties.

Although Sanctions often include a fine, where the Coaching and Mentoring Ombudsman Service issues one or more Sanctions, it is done to ensure that each party receiving one or more Sanctions reflects on their involvement in the detail of this grievance and works towards raising the Standards, Confidence and Excellence in the coaching and mentoring industry.  Fines will only be awarded when there is no other alternative.

Any and all sanctions will be clearly stated and noted in the Ombudsman Services’ Register.

Sanctions that have been applied against one or more parties in the grievance, the party can apply for each Sanction to be lifted when the stated conditions have been met.  The Head of Ombudsman Service/Appeal will use the information submitted on the Request to Lift Sanctions form and verify the evidence of compliance prior to confirming that the Sanctions have been lifted.  The party will be informed in writing of the lifting details and the records will be clearly stated and noted in the Ombudsman Services Register.

click here to complete the Request to Lift Sanctions form.