The Role of the Ombudsman Service 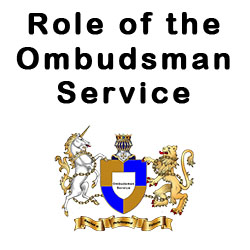 The Ombudsman Service has the power to make decisions that are binding on the: